Today I want to share four concepts that came out of my ideation phase. I present them in the two videos below and provide a reflective evaluation of each concept in this blog post. What they have in common is that they all work with the idea of repurposing seemingly obsolete material, but to a varying extent.

The concepts’ working tiles are:

and they all have their pros and cons and which one is “best” depends on what I choose to define as the goal of the project. After today, my next step will be to decide, which concept to continue with, based on my evaluation so I will explain what I find most appealing about each of them, but also where I see their flaws. 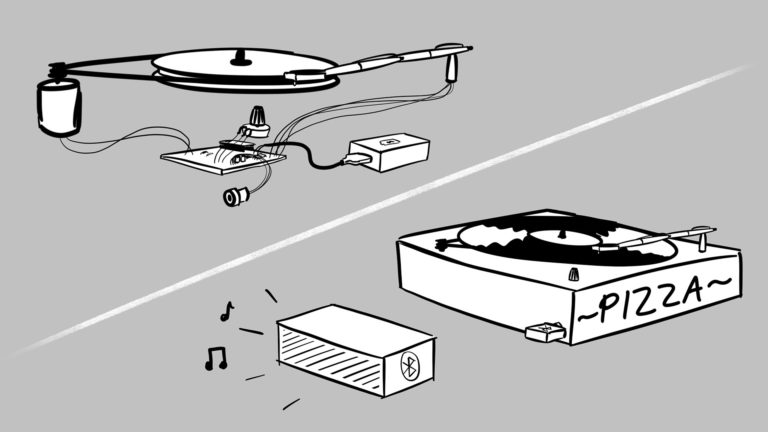 The  gramophone revisited would be a great way to encourage people with little to no experience in electronics to start making use of working components hidden in obsolete devices without necessarily having to solder anything.

If I continue this concept, I imagine that the outcome of it would be a website where you could order a DIY-kit that is available in different levels of completeness. Except for a powerbank and the motor that needs to be scavenged, the most “complete” set would include all necessary electric components, like a PCB with an attached, removable Arduino board, a record player needle, an audio jack, a control dial and all necessary connection wires. The components could feature clip-connectors and a cable with clamps to connect a scavenged motor so wiring would not require soldering. The website would however encourage you to order the smallest possible amount of components and give you suggestions in which obsolete products you could find the rest of them (like wire sourced from an old SCART- or LAN-cable). It would also provide suggestions what to use as an enclosure, belt, turntable, tonearm, etc. and further information what else could be done with the components.

While the gramophone revisited would surely be a good means to get people to go beyond the surface of their obsolete products and to start discovering their potential useful intestines, the product itself has a rather gadgety character. 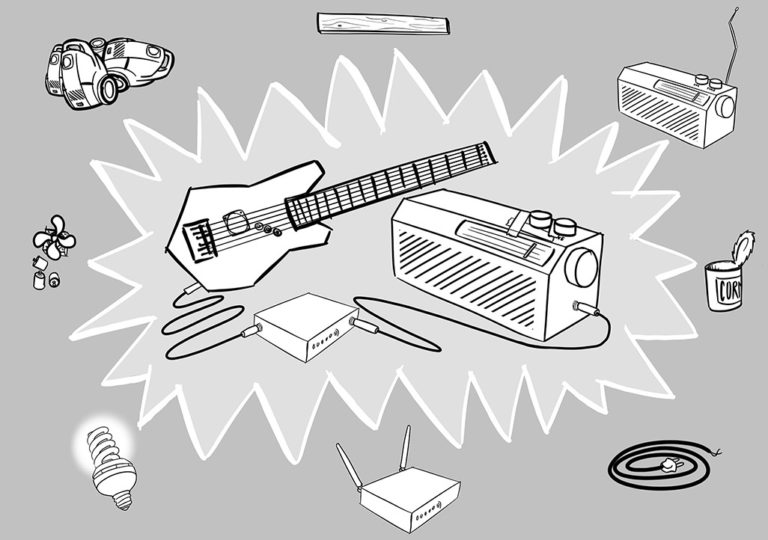 I think the Junk Rock Set is what I imagined in the beginning what this project would be about: Building things, using unexpected raw materials that at first glance do not seem to be a valuable resource at all.

If I continue this concept I would of course deign and make the items, but my focus would be on finding an interresting and entertaining way to document the process of gathering the components and turning them into something new.

I like that the artifacts (guitar, distortion effect, amplifier, guitar cables) are a complete system that consists of seperate items, so it would work well to create a series of videos about their creation, building on each other. To make the artifacts themselves and such a series of videos as interresting as possible, the repurposing-approach would have to be very consistent, also in the details, which would mean making even generic parts like the cables from old power cords and the cable jacks from tin-cans, etc. Such a project would carry the spirit of technological disobedience.

I think of the four concepts, this one has the greatest potential to attract a lot of eyeballs if mediated in an entertaining way. It could very well be the start of a compelling YouTube-Format. However, it should be noted that the single ideas to make pickups from old motor coils, a guitar body from recycled plastic, a fuzz distortion effect from an incandescent lightbulb and an amplifier from a transistor radio are not new. You can follow the links to see how people have done it before. But combining all those ideas into one compelling and consistent story would still be a reasonable curative act and a documentation of the process would certainly inspire an audience to change their perspective on seemingly obsolete items.

The idea behind this concept is to create a DIY vacuum cleaner that can adapt to different hoses and motors, so it can be made, using the hitherto unneccessarily trashed working components of discarded vacuum cleaners .

Reasons for putting vacuum cleaners out of use can be varied and range from decreased efficiency because of clogged filters or air leaks, unavailability of model-specific filters and dustbags, practically irrepairable damages of the injection molded housing, out-dated aesthetics or unappealing appearance of the aged, scratched device, funny smell and so on. Often it is also a combination of several of those factors that may justify a replacement decision. Of course vacuum cleaners can also simply break down with a failed motor and stop working, but this does not seem to be rule. I had a hunch that most vacuum cleaners would be disposed of with perfectly fine working motors in them, so I picked up seven of them from the electronic trash collection point of the student dorm I am currently living in, disassembled them and tested the motors, which all worked without exception. When I picked up the first two vacuum cleaners I just had the idea to repurpose their motors for something, but was soon wondering, if they could not simply be used in an Adaptive Vacuum Cleaner (AVC).

If I continue this concept, I imagine the outcome would be a working prototype and open-source instructions, how to build the AVC at home that can be augmented and improved by volunteers. Apart from making it a well working and safe product, the focus of developing it would both lie on providing adaptability to different hoses and motors. Aesthetically, I really imagine it to be a well-proportioned wooden box at the moment, both because this would be a design that boldly contrasts the deliberately timely appearance (keyword stylistic obsolescence) of retail versions and would be relatively simple to repeat by others. A “final shape” would however not be a great concern, as the project is open source and intended to be altered by others, so suggesting different versions would be encouraged.

The idea to create this product might sound banal, but it provides an example to break the buy-use-dispose consumer paradigm because a vacuum cleaner that you can build yourself from generic material and components from disposed devices has no “expiry date”, as its endurance does not rely on manufacturer-specific spare parts, services or consumables like dustbags and filters.

The vacuum cleaner is for several reasons an ideal candidate for an adaptive DIY-product: A great portion of it can be made from generic material and with the help of rather simple means. The two components for which this does not apply (motor and hose+Accessories) are often still in good shape when a device is put out of use and can be sourced from it. Moreover, the vacuum cleaner motor comes with the turbine already attached, so no motor coupling that needs to fit different motor shafts (like in the adaptive blender concept below) is neccessary. Though the motors and hoses are not standardized, they also do not vary wildly in shape from model to model, so it should be feasible to make adapters for them. Another aspect that suggests the suitability of the vacuum cleaner for this approach is that potentially hazardous parts and high voltage circuitry can be seperated well from the user.

The greatest question mark of the concept is probably, who the target group for an AVC is. The motivation to build a vacuum cleaner yourself instead of simply buying it is currently primarily an ethical one. If one needs such a device the options are to buy it new or used or to probably lend one, simply put: to do what is expected from a consumer. For the person in need for the device, there is not much room for challenging the paradigm as long as nobody designs plans for an AVC.

Even if not many people immediately decide to build an AVC, it would still be an important product to address the issue of functional components being thrown away and its relevance will only continue to grow as the amount of finite resources decreases and trash mountains are growing. So an AVC is at the same time a useful product and a conversation piece in the debate if our global society can afford to go on wasting resources and producing disposable products. However, if we like it or not, at the moment it is still happening. The AVC is a reaction to this issue and those who build one position themselves against it. So instead of suggesting, how the economy would need to change, so we can make responsible buying decisions, the AVC gives an example how users could actively challenge an economy.

I could even imagine that AVC-building workshops could be held. Although I cannot predict the future, forecasts show that automation will fundamentally change the way we work. As with the previous industrial revolutions, this will mean that we will be able to devote ourselves to new tasks if our previous work is carried out by machines. It is to be hoped that this will lead to an increased ability to address global issues such as the waste of resources. Already today, initiatives are being formed to rework the output of the throwaway society and the AVC would be another product in the catalogue of things that put a stop to waste. The idea that a changing labour market will lead to more workers being employed in services that ensure higher longevity of products is also resembled in a study commissioned by the EU. 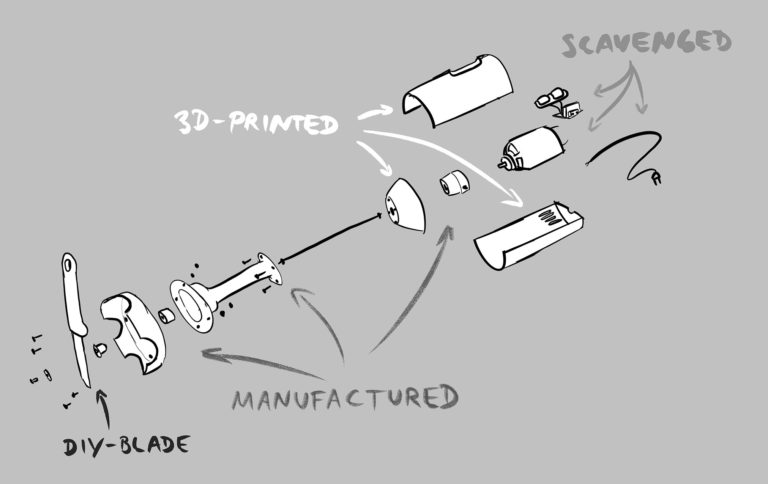 Like the AVC, the Adaptive Hand Blender (AHB) can be made using hitherto unneccessarily trashed working components – logically in this case from unusable blenders instead of vacuum cleaners.

The greatest difference between the AVC and the AHB is that the blender would in part be made by the manufacturing industry, as it does not appear feasible to DIY the rod that houses the blade and connects it to the motor and it’s enclosure. The AHB exemplifies, what could be provided by the industry for customers who prefer  to use products that can adapt or be adapted to fit unspecific parts instead of consuming new devices that potentially need to be disposed of in the future. Like with the vacuum cleaner, the incentive for the customer to do so is mainly an ethical one (to use resources that would otherwise be spoiled), but the idea of purchasing a product that can be used virtually indefinitely in comparison is, of course, also appealing.

If I continue this concept, I imagine that the outcome of the project would be both the design for the rod and the 3d-printable enclosure – both open source. I would approach the project, like I did with the vacuum cleaner and start by disassembling a variety of hand blenders to analyze them. Like that I would see in what ways motors and electronics differ from model to model and get data about how the enclosure and motor-coupling would have to be designed in order to allow for great compatibility – provided the analysis suggests that the approach is feasible altogether.

The greatest flaw of the AHB is simply that in comparison, the vacuum cleaner feels more compelling. This might be the case because a blender is simply smaller and feels less important in the hierarchy of household devices., but there are more reasons. While showing perspectives for the manufacturing industry is a logical next step to evolve the concept of adaptive products, from a sales-perspective, a product like the AHB is counter-productive, as a product that does not require future replacement or manufacturer-specific services prevents future sales. However, if marketed right, offering such products has the potential to refine a company’s reputation positively. It signals that their intention is not to dictate to their customers what they should do with their products and what not, but instead to provide solutions that allow them to do what they want.